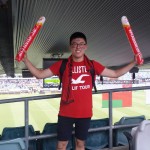 I have been tutoring both in USA and Australia in the subjects of mathematics and English. I consider it more than just a job, but a hobby and passions